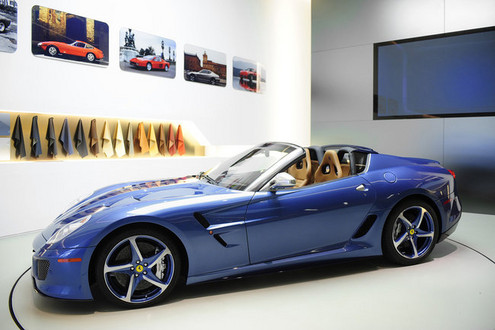 This magnificent car is the Ferrari Superamerica 45 which as we had reported earlier, will debut at this year’s Villa d’Este Concours d’Elegance.

At first glance it looks almost identical to the Ferrari SA Aperta, but it is in fact a one-off model inspired by the Ferrari 400 Superamerica of 1960s. It has the same Caribbean Blue exterior color which is also features on the rims.

The car is also slightly different in terms of design than the Aperta, with a unique carbon fiber body kit consisting of a front spoiler lip, side sills, a new rear diffuser and a magnificent tail spoiler which results in an exquisite look there. The roof too is made of carbon fiber and has the same mechanism as the SA. The Superamerica also gets new mesh grilles at front.

This car is apparently built for American real estate developer and car collector Peter Kalikow who has a number of bespoke Ferraris in his garage. The 45 in the car’s name is a tribute to the 45th anniversary of Kalikow’s relationship with the Italian supercar maker. 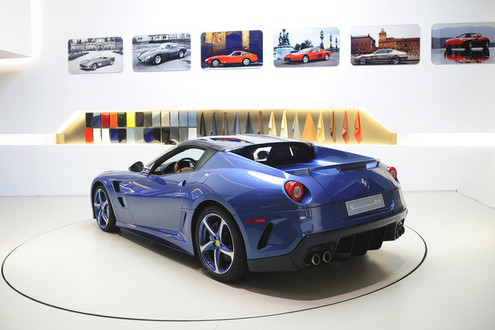 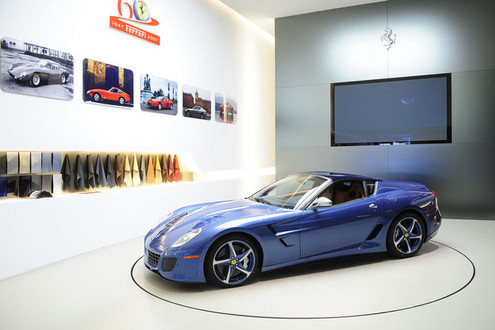 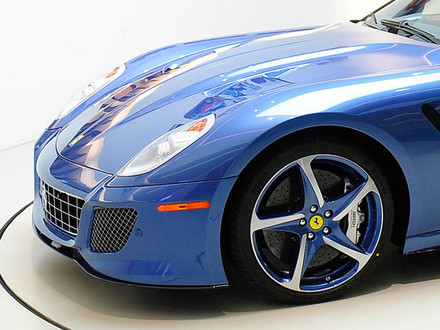 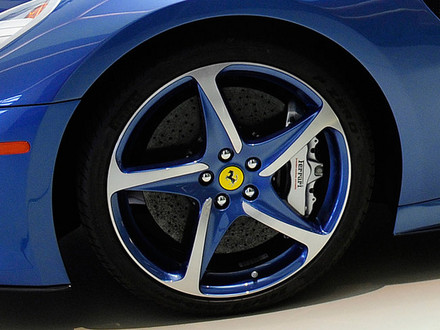 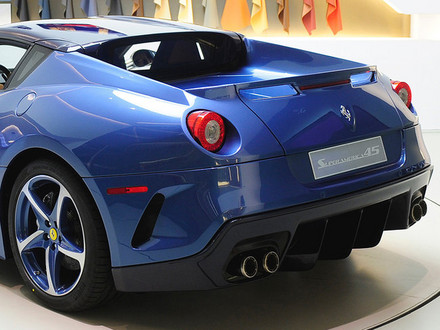 New York collector and Ferrari enthusiast Peter Kalikow visited the factory to take delivery of his Special Projects Ferrari Superamerica 45, a unique one-off model. Styled internally by Ferrari Design and engineered and built in-house, the car was specified by Mr Kalikow to celebrate 45 years since he first became a Ferrari client and will make its public debut on the 20th of May at the Villa d’Este Concorso d’Eleganza.

The design is bespoke, featuring a carbon-fibre rotating hard-top which incorporates a rear screen. The boot is entirely new to house the roof when open, and is now in carbon-fibre with a design optimised to reduce drag and increase rear downforce.

The rear buttresses are body-coloured, integral with the rear wheelarches, and incorporate rear quarterlights. The side view is further distinguished by double air vents on the front wing. The Ferrari Superamerica 45 also features a specific chromed front grille and special burnished aluminium A-pillars, wing mirrors and door handles.

The Superamerica 45 is finished in an exclusive Blu Antille, a colour that matches another important car in the client’s collection – a 1961 400 Superamerica cabriolet nr. 2331SA. The wheels are body-coloured with a contrasting diamond finish to the spokes. The roof and other carbon-fibre elements of the bodywork – front splitter, side skirts and rear diffuser – are in a special contrasting darker blue, a theme that is carried over to the cockpit which features dark blue carbon-fibre dash trim and driver zone. The interior is another area of exquisite personalisation, with a carefully selected combination of Cuoio leather trim and Blu Scuro carbon fibre details and a latest-generation touch-screen infotainment system.