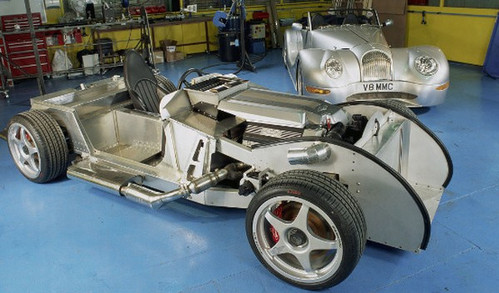 Morgan’s styling department might live in 1960s, but their engineers are moving on, preparing a new electric drivetrain for the Plus 8.

They’ve teamed up with Zytek Automotive to develop the Plus E, and apparently, they’re going to make the world’s first manual EV. An electric sports car with a manual gearbox is quite something.

However, it’s not going to have dramatic effect on the car’s performance. It will perform within the confinements of the electric car. For instance, “You are not going to get any benefit from dropping down a gear at high speeds,” according to the project manager. But it will be more fun to drive than normal EVs, which feel like driving a laptop.

The car is said to have a limited top speed of 115mph, which is not exactly impressive. But there will lots of torque at low rpm. That will provide blistering acceleration, and, when the mood takes you, lots of sideways fun. The manual gearbox is especially helpful here.

It will be a fun car for sure, but your fun will be short-lived, as the batteries can hold enough juice for only a 100 miles.

They will be unveiling the car in concept form at the 2012 Geneva Motor Show. If enough interest is shown in the car, then a production version might follow.