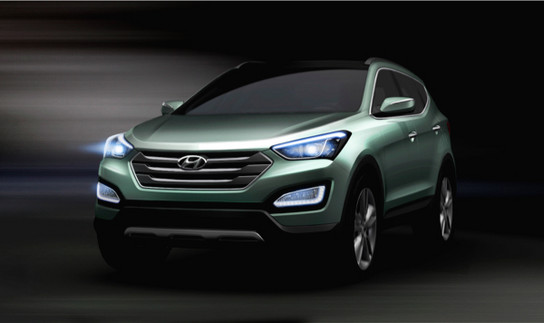 Hyundai revealed the looks of the new third-gen Santa Fe SUV with these teaser renderings they published on Twitter. The new model will make its debut at the New York Auto Show in April before going on sale toward the end of the year. Compared to the current Santa Fe, the 2013 model looks much, much better.

With the arrival of the new Santa Fe, the last of Hyundai’s models with pre-renaissance design will be gone for good and the whole range will have Fluidic Sculpture look. The new Santa features an evolution of that design philosophy called the “Storm Edge,” which captures the strong and dynamic images created by nature during the formation of a storm, according to Hyundai.

The front-end is alright, but the rest of the car looks too like the ix55 in our view. That said, we have to wait for the car to be revealed in full to what’s exactly what. Hyundai also promises cutting-edge technologies, good fuel economy and practical use of space for the new SUV.