Some people have an insatiable need to show off their wealth, even when they die. That’s why custom hearse builder Biemme Special Cars thought there would a market for this Rolls Royce Phantom Hearse B12. The standard Phantom is a sizable car, but it’s nothing compared to this hearse, as it’s 276-inches longer than the extended-wheelbase Phantom. It’s actually a limousine, for the dead.

The hearse is made from aluminum with over 600 assembled parts and over 650 feet of welding. The idea was to keep the weight as low as possible, so there wouldn’t be that much extra pressure on the car’s  6.75-liter V12 engine and air suspension system, which remain standard.

There’s no luxury amenities at the back of the car, because, well, what’s the point. Still, Biemme says each of these Phantoms will most at least half a million Euro.

A classy way to leave the world, for sure. You wouldn’t wanna go on a Maybach hearse, that’d be preposterous! 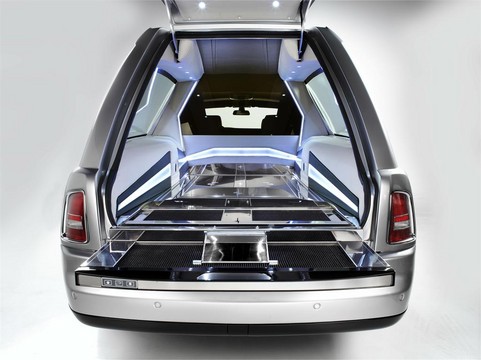