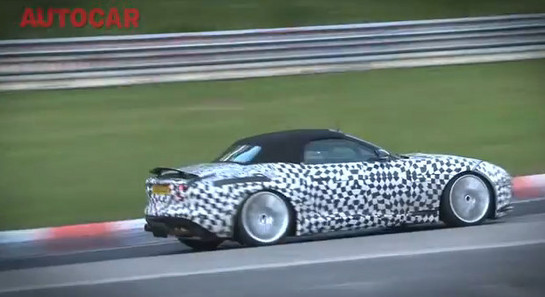 A few days before its big debut at the 2012 Goodwood Festival of Speed, the new Jaguar F-Type sports car has been caught doing some performance test at the Nurburgring in Germany. Well, to be precise it’s not this version of the F-Type coming to the festival. This one is the V8 version featuring four big tailpipes. The one dispatched to Goodwood is the Supercharged V6 version.

And the really good news is, the 500 horsepower V8 is not for an R version or anything. That means an even more powerful version of the car might be coming in the future. That said, if we were to buy an F-Type – when it arrives in 2014 – it’d be the V6. That engine makes 375bhp and 332lb-ft of torque which is fairly enough for having fun, it makes a great sporty noise, and it will be much more fuel efficient than the V8.