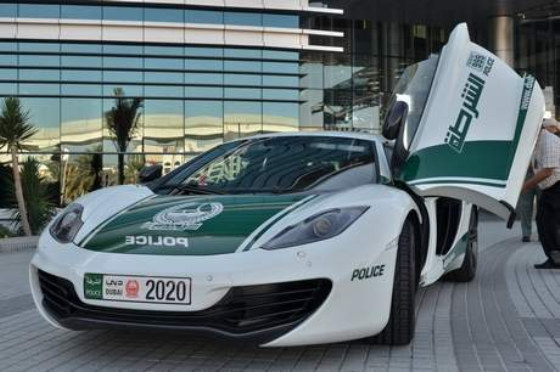 When someone at the Dubai Police headquarters tweeted a picture of the McLaren 12C patrol car a while ago, some accused of them being liars with excellent Photoshop skills. Turns out they did indeed buy a McLaren 12C to reinforce their army of super patrol cars.

It is not a hard task converting a car to a Police cruiser in Dubai. It just has to be white. Then they can put some green stickers on it, and there’s your lot. Mind you, these cars are not going to be used for Police work. They are locked away in an air conditioned garage and only come out every once in a while to show off, especially when there is a national parade or something. Here’s Dubai Police McLaren 12C on such occasion:

Of course, it is very sad that a nation’s sense of pride is wrapped up in their luxury cars and fancy buildings. But there is no denying they’ve put together an impressive lineup of Police cars in Dubai, which includes the likes of Mercedes SLS, Audi R8, Chevy Camaro, Nissan GT-R, Lamborghini Aventador, Ferrari FF, Mercedes SL63 AMG, Aston Martin One-77 and…

Next to Dubai we have the small nation of Qatar who instead of blowing up their oil cash on silly stuff is being more mature, taking up an active role in solving global issues. Who do you think will be remembered a hundred years from now in the history ebooks?