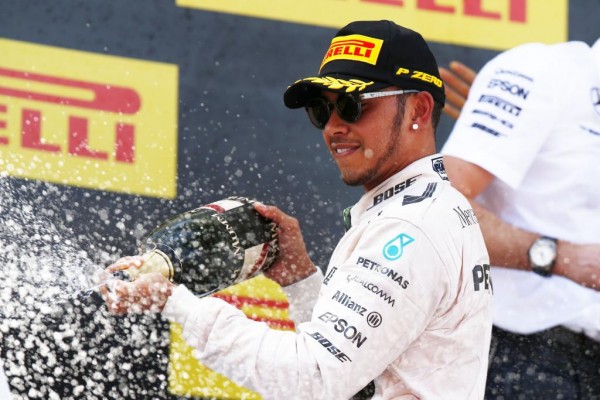 Looks like Lewis Hamilton is awfully happy at Mercedes AMG Petronas F1 team since he decided to extend his existing contract for the 2016 to 2018 Formula One seasons. Why wouldn’t he be happy? Not only they are winning races, Mercedes allows Lewis to basically do whatever he wants, including buying cars from his former team and current rival.

Lewis Hamilton joined Mercedes AMG Petronas from McLaren in 2013 and it didn’t take very long for him to settle in and start winning races. He won the 2014 Formula One World Championship by finishing first in a staggering 11 Grand Prix races, and this season too he is already leading the 2015 ranking with 20 points advantage over the second place, occupied by his teammate Nico Rosberg.

Lewis Hamilton commented: “Mercedes is my home and I couldn’t be happier to be staying here for another three years. This is a company filled with real passionate racers, from the board room to the factory floor, and an incredible hunger to win. Even after the success of last year, that hunger is greater than ever – and it’s the same for me, too. The Mercedes car I am driving right now is the best I have ever had in my career; it’s just so much fun to be out there every weekend, on the limit and fighting to win at every track. Mercedes-Benz began supporting me in 1998 so I am very proud that this contract means I will mark 20 years with Mercedes in 2018.”

Mercedes is happy with their driver, too. Hamilton seems to be the man with whom they can relive the good old days of the original Silver Arrows. Lewis is indeed the modern-day Stirling Moss, only a bit darker and with more tattoos.

Head of Mercedes-Benz Motorsport Toto Wolff continued: “Continuity is one of the key factors for delivering success in Formula One and we now have that in place. Lewis enjoyed an historic World Championship season with Mercedes-Benz last year and it was a priority for this season to renew his contract for the next term. We have taken the right amount of time with the process and not rushed ourselves. The result is a strong agreement that will enhance Lewis’ association with the Mercedes-Benz brand, and that recognises and respects the market value of Lewis and of Mercedes in Formula One. Lewis’ sporting track record speaks for itself and he is a great personality for the company. Personally, I am looking forward to continuing to race with the strongest driver pairing in Formula One and to more historic achievements together.”