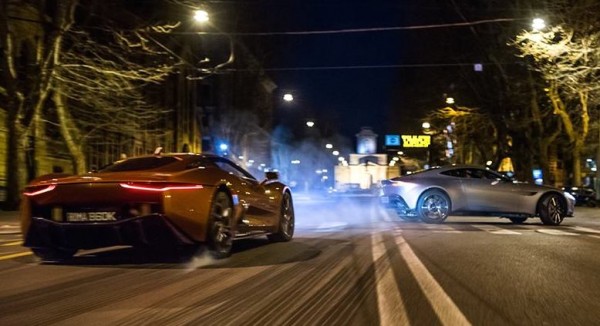 As you may know from our behind the scenes coverage of thew James Bond flick, SPECTRE, the film includes some very delicious chase scenes with some seriously hot super cars. The latest official teaser shows how they filmed the Aston Martin DB10 vs Jaguar C-X75 chase scene in Rome.

And yes, that big guy is WWE wrestler-turned-actor Dave Bautista who plays the baddie Mr. Hinx in the new film. The SPECTRE is shaping up to be a pretty awesome movie:

In case you didn’t know already, Aston Martin DB10 is a one-off car built by the British auto maker based on the V12 Vantage exclusively for the movie. It is the new Bond car and in SPECTRE it takes on a number of rivals including Range Rover Sports and the amazing Jaguar C-X75 you saw in the video. That Jag is also a one-off, but it’s a concept they made years ago and then put on hold because it was deemed way too exotic for today’s market, meaning they thought it might not sell well enough. With the high-profile role the C-X75 has now won though, Jaguar may rethink their strategy in the near future.