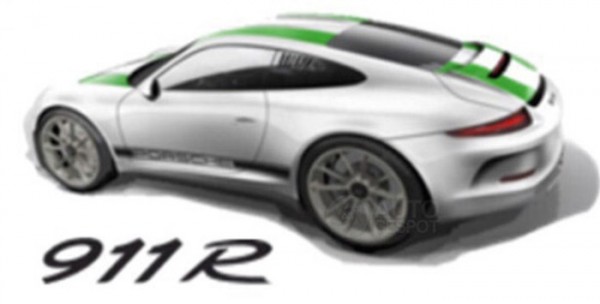 This blurry picture is believed to be lightweight, semi-hardcore version of the 991 we’ve been hearing about for a while. Called Porsche 911 R, this limited edition model harks back to the original 911 R from fifty years ago, boasting lightweight body panels, more power, and a manual gearbox, if the rumors are true.

Based on what we can see in this computer generated image of the upcoming Porsche 911 R, the car does away with all the usual spoilers and wings you see on other high-performance 911s and gets its own unique engine cover. The roof appears to be a double bubble affair, although it could be a visual trick caused by those hefty green stripes.

The 911 R also appears to have extra large fenders which seem to be even wider than that of the Carrera 4. They are certainly big enough to accommodate those cool GT3 wheels. The tailpipe arrangement is like that of the Mark II 991 with central pipes integrated into the diffuser.

As mentioned, the biggest highlight of the Porsche 911 R will be its lightweight body. The windows are expected to be replaced with plastic in this model, but whether they will use carbon fiber for body panels will remain to be seen. Extensive use of carbon will undoubtedly increase the price of the car, but then again, it’s a limited edition model and the word is all of them are already pre-sold.