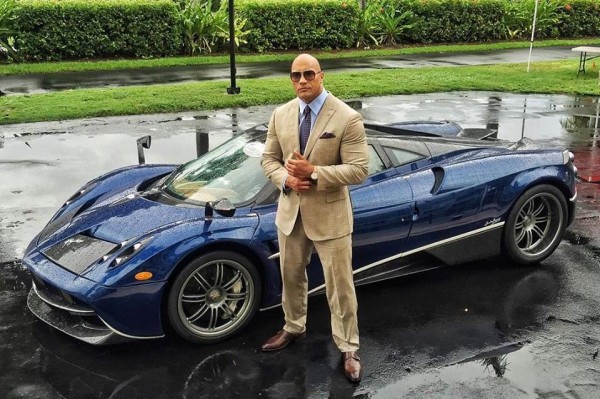 This whole super cars Dwayne Johnson, aka The Rock, can’t fit in is becoming a social media thing. Every once in a while DJ releases a photo of a super car he fancies but can’t have on account of his size. Recently we’ve been getting more photos since Dwayne is filming season two of Ballers, a supercar-heavy HBO series about American football.

The latest high-end super car Dwayne Johnson is letting us know he can’t have is the Pagani Huayra. You can tell The Rock wants this car a lot, as he’s gone through the trouble of researching the name and knows it means “God of the Winds” in Quechua, the official language of the Inca Empire. As for him not fitting in it… we think this time he’s playing with us.

You see, Pagani themselves have a famous test driver called Davide Testi, and he is a pretty huge guy with inked arms and the build of a wrestler. He is not Dwayne Johnson big, but he’s big nonetheless, and he fits in these cars no problem at all. So maybe it is that DJ actually loves his trucks too much to swap them for a fancy ride like this and he’s making excuses to avoid it. After all, if a man wants to be in something bad enough, he finds a way to do it no matter what!

And as a final solution, we’re pretty sure that if a man like Dwayne Johnson goes to Pagani and ask them to build a long wheelbase Huayra for him, they wouldn’t say no.