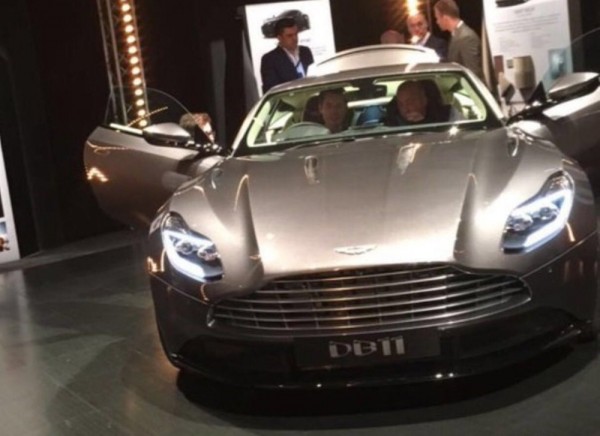 Exciting news from Gaydon as we get our first look at the all-new Aston Martin DB11 in this grainy spy photo which seems to have been snapped during a private viewing event. The replacement for the DB9 appears to be everything we were expecting, and then some.

Everybody who loved the DB9, and that’s pretty much every human being on the planet, was worried a bit that whatever Aston comes up with next might not look as good. Or, they might deliberately go the other way and change the whole design language like what Maserati did with the Quattroporte. But none of that is that case. Turns out Aston designers know what they’re doing. Aston Martin DB11 seems to be hella hot, and we’ve only seen its front-end so far!

The car is, naturally, instantly recognizable as an Aston what with the large front grille and the whole curvaceous profile which seems to be tamed a little in the new model. The DB11 gets a set of new headlights which have just a hint of One-77 in them, and an overall more sculpted, more aggressive look than the DB9 which is a bit softer and cuddlier to behold. We can’t wait to see the rest of this car, and especially the interior.

It has already been confirmed that Aston Martin DB11 will be powered by a brand-new twin-turbo V12 engine that is smaller than the current unit (5.2 liter against 6.0) but should be even more powerful than the version they use in the Vanquish.