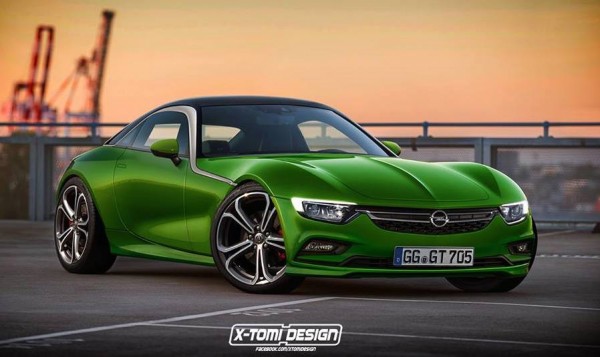 Turns out all the brouhaha Opel made about the debut of their new GT concept was for nothing. They have confirmed there is no plans for a production Opel GT, which is shame, because as you can see in this speculative rendering it could have been good.

The concept version of the Opel GT was way too fanciful, what with those unique doors and windows, the roof arrangement, and above all, the red tires. The thing was an homage to some of Opel’s most exciting concept cars of the yesteryear. But the layout of the car and the whole profile of it, well, it could make for a pretty cool little sports car.

What we liked most about the concept Opel GT was the chassis and drivetrain. The car is a lightweight, mid-front-engined, rear-wheel-drive car with a tiny 1.0 liter three-cylinder turbo engine out of the ADAM. It was so in tune with the times, especially in the sense that it gave a higher priority to lightness, handling, and driving feel than outright power and performance.

In turning the GT into a production model, designer X-Tomi has kept all the cool features of the car such as the profile, the stance, and the unique trimming of the windows and pillars, but added regular doors and windows and tires. We like this a lot.