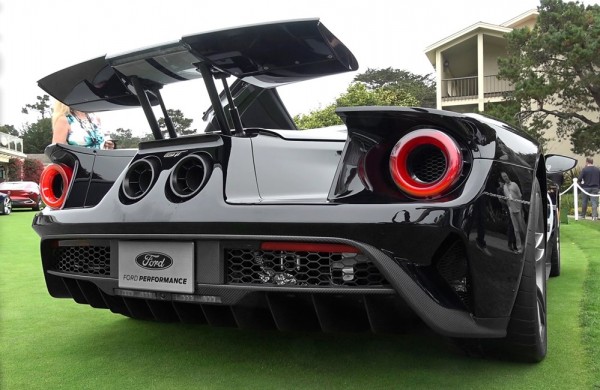 As you may know, last week Ford announced that due to popular demand they are adding two more years to the production span of the new 2017 Ford GT super car. Immediately after that the car lost some of its sparkle because whatever number of GTs they had planned at first it is now doubled, which means the exclusivity of the car is halved. Still, this is good news for those who got rejected in the first round of signing up for the opportunity to buy a GT.

To celebrate this occasion we invite them to have an up close and personal look at this 2017 Ford GT 66 Heritage Edition straight from the Pebble Beach lawn. Now that the regular GT is no longer exclusive, the Heritage version could be the one everybody wants.

2017 Ford GT Heritage Edition is a limited edition honoring the GT40 Mark II driven to victory by Bruce McLaren and Chris Amon at Le Mans in 1966. The highlights of the car on the exterior include Shadow Black paint in either gloss or matte finish with silver stripes and exposed carbon fiber package, Frozen White #2 hood and door graphics, and 20-inch one-piece forged aluminum wheels in a gold satin clearcoat with black lug nuts. Inside this edition comes with carbon-fiber seats in Ebony leather, with pillowed inserts and plow-through stitching, and the seats’ head restraints and the steering wheel with the Ford GT logo, and Ebony leather instrument panel, pillars and headliner.