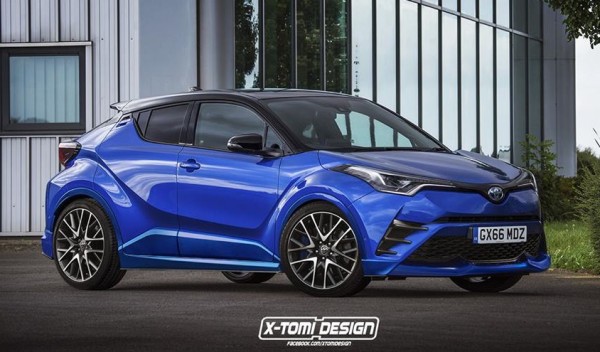 Now that it’s official the uber-cool Toyota C-HR is hitting the markets the world over with roughly the same design as the concept, it’s time for the rendering artists to break out their rendering tools and show us the crossover in different guises. The first to take up the challenge is X-Tomi Design with a TRD package.

The Toyota C-HR TRD imagined in this speculative rendering is looking a little bit like a hatchback. But that’s not really the renderer’s fault. The inspiration for this car has been the existing Toyota TRD model. Thus, the C-HR gets custom bumpers on the front and rear plus new sills, lowered ride height via sport suspension, and a set of pretty large wheels.

This Toyota C-HR TRD, mind you, is designed as a street smart version of the crossover. If there is to be a TRD Pro version that one’s going to get jacked up suspension, protective parts under its bumpers and running boards, maybe even a snorkel. We would also like to see a tuner engine in whatever variant is going to be launched next – if any – because the standard engines for the C-HR are pretty week and not at all exciting.