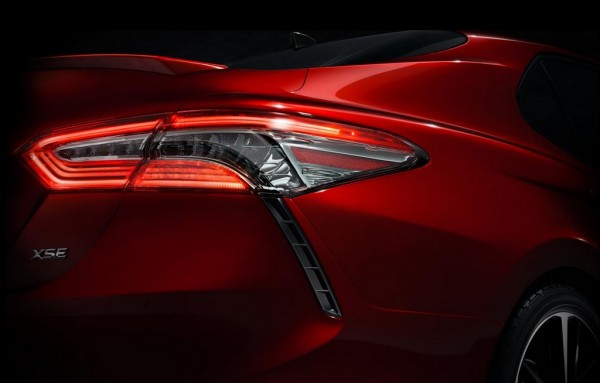 For decades the Toyota Camry has been a joke in the auto world in that anything dull and boring was compared to it as the benchmark for tastelessness and mediocrity. That might soon change, though, as Toyota has prepared an all-new one which they will unveil at the 2017 Detroit Motor Show (NAIAS) in January.

In describing the new 2018 Toyota Camry, which is still very much under wraps, the company uses words like ‘eye-catching’ and says it’ll make you stare for long periods of time which means they believe the thing is incredibly sexy. Well, the teaser image they have released certainly shows some intriguing curves and vents, plus some Lexus-inspired highlights in the taillight and the boot lid spoiler. Looks like the new Camry really has become a young hot thing with many exciting characteristics.

Now the question is, is that the right thing to do? Will a cool and sporty 2018 Toyota Camry be as successful as its beige and pasty predecessors? After all, it was that very dullness that attracted many people, most of whom elderlies with a degree in accounting or geography, to the car. An exciting new design will definitely scare most of them off and we’re not sure it can attract enough new customers to make up for it.