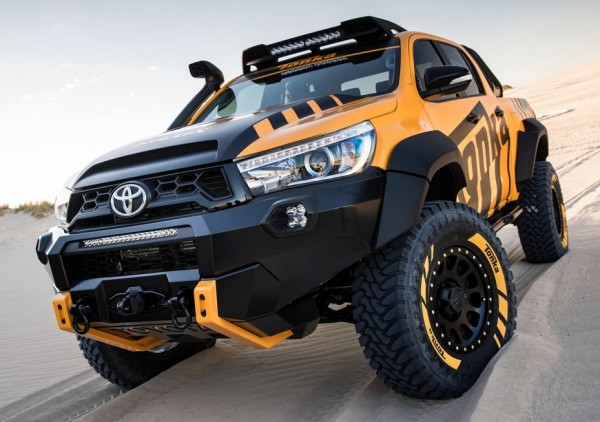 Celebrating HiLux’s scoring the title of Australia’s best-selling vehicle last year, Toyota has come up with something rather unusual but extremely cool. The Toyota Hilux Tonka Concept, as the name suggests, is a Hilux pickup truck designed to look like a life-size Tonka truck!

And just like the Tonka truck of your childhood, this real life toy is the kind of the sandpits everywhere – real sandpits like the shores of Tasmania, for example. The biggest highlight of this amazing concept is the black-and-yellow livery, but it also boasts some technical features that could make it a pattern for Hilux owners to customize their own trucks after.

Toyota Hilux Tonka Concept is based on the R5 double cab model powered by with a 2.8-litre four-cylinder turbo-diesel engine and boasting high-riding axle, heavy-duty suspension and 35-inch diameter tyres, not to mention six inch suspension lift. The truck also gets a bonnet air scoop and carbon skin as well as a front bar, high-performance off-road LED lighting in the bar and roof pod, thick bash plate, and tubular side rails. The more Tonka-ish highlights include a new tailgate, also wrapped in carbon fibre, with an integrated spoiler and two air vents,  durable, lightweight strap rather than a handle for the tailgate, and a removeable tubular frame inside the tub holding diesel fuel cans, while storage boxes house the recovery gear needed for extreme off-road driving. A fire extinguisher, axe, shovel and high-lift jack are also fitted. 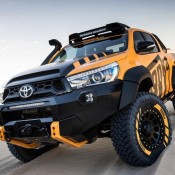 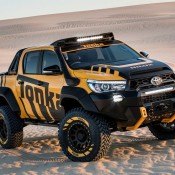 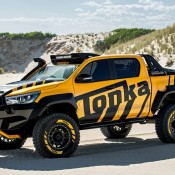 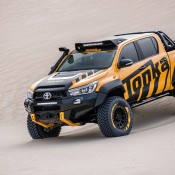 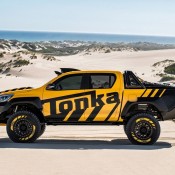 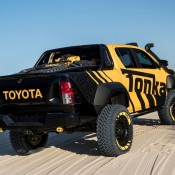