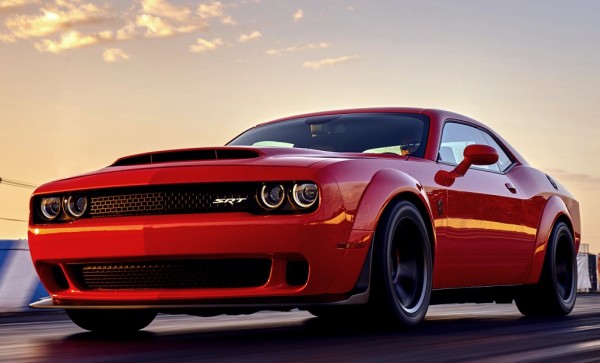 Chrysler revealed today the official pricing for the simply awesome Dodge Challenger Demon, and yes, it is a helluva bargain. The 2018 Demon is priced at $84,995. Granted, it’s not exactly cheap, but nowhere else they give you the keys to 840 horsepower for $85K.

What’s even cooler is that the Dodge Challenger Demon MSRP includes the $1,700 gas guzzler tax, excluding. But then you have to pay $1,095 in destination charge, so it’s not that big of a deal. What is a big deal is the fact that the Demon Crate and options available to owners for $1. That is the front passenger seat, rear seats in leather or cloth, and trunk kit all for one dollar.

By now you are probably familiar with the specs of the Dodge Challenger Demon, but let’s do a quick recap anyway. The beast is the world’s most powerful production V8 with 840 hp and 770 lb.-ft. of torque. That kind of power basicall makes the Demon a turnkey dragster, which is why National Hot Rod Association (NHRA) has already banned it from competition. They have also confirmed the Demon has a quarter-mile time of 9.65 seconds and 140 miles per hour (mph) which is as insane as the 0-60 mph sprint time of 2.3 seconds. You can beat Bugattis and Koenigseggs with this thing…at least in straight line.

So price-wise, the Demon is by no means a dream car. It is well within reach of many people. Still, you may not be able to get one at that price because, a. the dealers are going to put huge premiums on it since the thing is so desirable, and b. FCA is only producing the Demon as a single model-year car with a run of 3,000 for the United States and 300 for Canada. Hopefully, those numbers will be increased due to popular demand.