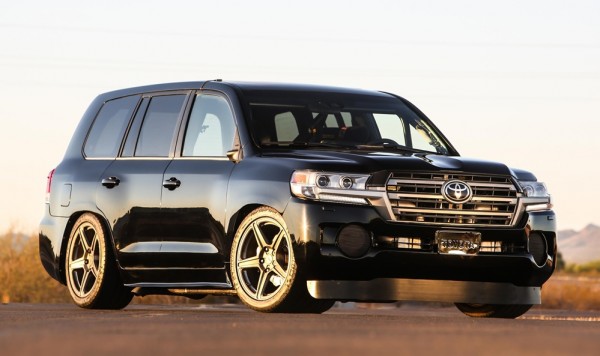 SEMA cars usually end up in the corner of a warehouse or get dismantled after the show. But the Toyota Land Speed Cruiser of 2016 SEMA was too good for such a treatment, which is why they brought it out of retirement and sent it to Mojave so it can have a shot at the title of World’s Fastest SUV.

And it snatched that title like it was nobody’s business. With 2,000 horsepower and a NASCAR driver behind the wheel, the Toyota Land Speed Cruiser managed to set a trap speed of 230.2 mph which is 19 mph more than the previous record. The amazing thing is the Cruiser could go even faster as it still had some track left, but they decided not to push the heavily-modified engine too hard.

The engine in Toyota Land Speed Cruiser started life as a normal 5.7-liter 3UR-FE V8 which is found in the road-going version, but the engineers from Toyota’s Motorsports Technical Center (MTC) added to it a pair of volleyball-sized Garrett turbochargers that are capable of producing up to 55 PSI of boost. Other changes include a custom-made intake manifold, custom racing transmission, toughened, lowered suspension, narrower tracks and wider Michelin Pilot Super Sport tires.