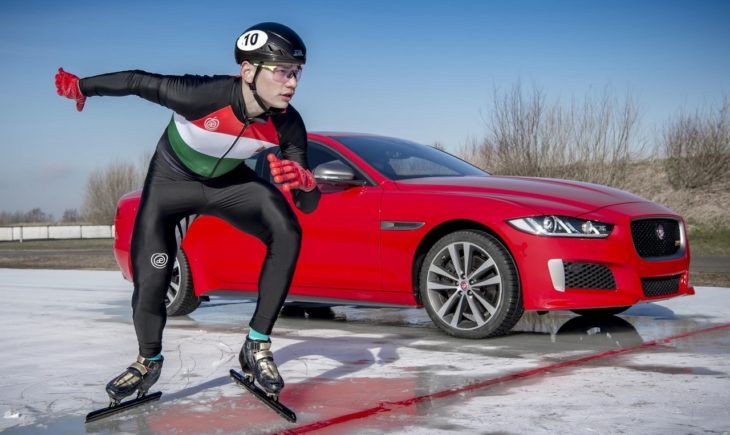 To put the all-weather, all-wheel-drive capabilities of the Jaguar XE 300 SPORT into perspective, the British car maker came up with a neat challenge. They put the sports sedan up against Olympic champion speed skater Shaolin Sándor Liu on an ice track. And the car bested the human skater’s time by a huge margin.

The venue for this fun challenge was the world’s longest artificial outdoor ice circuit, at Flevonice in the Netherlands. Sándor Liu currently holds the records for the fastest lap around this track at 4 minutes 4 seconds. The all-wheel-drive Jaguar XE 300 SPORT went round in 3 minutes 3 seconds at an average speed of 36mph. To add insult to the injury, Liu’s girlfriend, Team GB skater Elise Christie, was part of Jaguar’s team and actually rode in the car as it beat her bae.

While the skater could probably beat a two-wheel-drive car, the AWD XE proved way too grippy for human skills to match. The car features a 300PS 2.0-litre Ingenium petrol engine with 400 Nm of torque which enables it to accelerate form 0 to 60 mph in 5.4 seconds. Jaguar XE 300 SPORT is distinguished over regular models by Dark Satin Grey details including the door mirror caps, rear spoiler and grille surround, along with 300 SPORT badging on the front grille and bootlid, and 19 or 20 inch grey wheels. 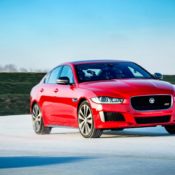 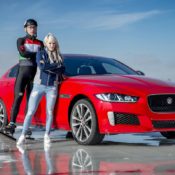 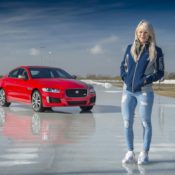 Shaolin Sándor Liu, said: “I thought I would have a big advantage over the car on the ice and was pretty happy with my time considering the conditions but when I saw the XE 300 SPORT take off from the start line, I had a feeling it would be faster.”