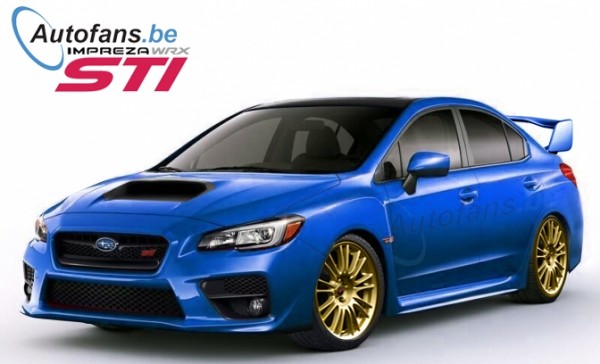 Nobody is even sure yet that this leaked picture of the new 2015 Subaru WRX is the real deal. But that’s not stopping people from dreaming about it. Some went further than that, fiddling with that image to try and convert it, virtually, into an STI model.

Again, Subaru has not yet confirmed if an STi version of the new WRX is in the works, and if there is, when it would be released. So this is, in essence, pure fantasy, a flight of fancy. It is rather good though. Well, by WRX STI standards.

The Photoshop guru who came up with this rendering of the 2015 Subaru WRX STI used the design and traditional color combination of the previous STIs on the new car. So it gets a large rear wing, a more prominent hood scoop, side skirts, the all-important gold wheels, and the rally-derived mica blue paint job.

We have some fantasies of our own about the STI’s technicalities. We reckon the car will get something like 350 horsepower, Subaru Symmetrical All-Wheel Drive, and a manual gearbox with an optional dual-clutch available as well. There will be powerful electronic overlords governing the car’s behaviors, but that sweet STI magic will still be alive and well.