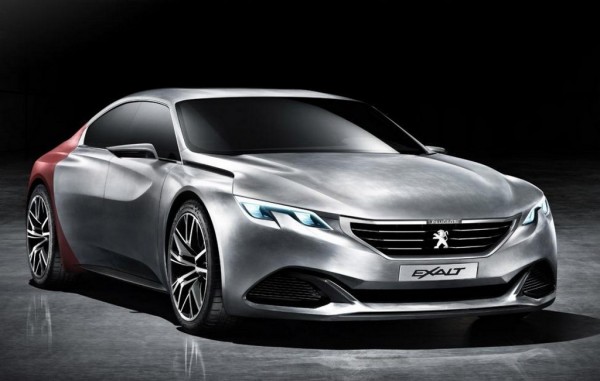 This is the concept car Peugeot has been teasing us about since January, now revealed a few days ahead of its debut at Beijing Auto Show. Called the Exalt, the car is a follow-up to the Onyx Concept, and it is just as innovative in terms of materials.

You probably remember the Onyx’s untreated copper body panels. Peugeot Exalt does not have that. Instead, it uses a blend of crude steel and Shark Skin efficient textile. Design-wise, the car is a four-door coupe featuring pillar-less doors, unique LED headlights, and Peugeot’s signature grille. That crude steel body makes the whole thing look a bit out of shape, but it also gives it a certain charm.

As for the interior, the dashboard of Peugeot Onyx was made from recycled newspaper. Peugeot Exalt is said to be a bit more luxurious than that, featuring high-end materials such as leather, ebony wood, and raw steel.

Just about the only normal thing about Peugeot Exalt is its powertrain, which is in fact a highly-advanced hybrid system. Using a combination of petrol engine and electric motor, it makes a total output of 340 horsepower. That makes the Exalt a sports car. Further details will be revealed closer to the car’s debut on April 20.