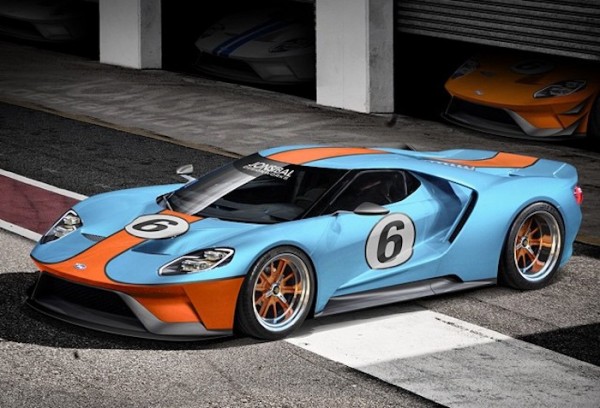 Yesterday Ford dropped a bomb on Detroit by revealing an all-new Ford GT. And it’s not a design study, either. The car is slated for production next year. The first thing most people thought upon seeing the new GT was how it looks in Gulf livery?

That is a question you don’t need to concern yourself with anymore. Designer Jon Sibal went ahead and rendered the GT in the famous Gulf motorsport colors. As you can clearly see, the answer to that question is a completely and totally awesome!

Sibal has applied the Guld colors to the Ford GT with utmost care and attention to details, so even the wheels get their own special touch. The special blue base of this livery is nicely complemented with orange stripes and the all-important racing number. We are definitely going to see a lot of GTs in these colors in the real world.

Just to recap, the new 2016 Ford GT is powered by a 600 horsepower EcoBoost V6 and comes not only different design than the original GT, but also a substantially revised interior as well. If the original Ford GT is a fine old Scotch, the new model is like that Scotch mixed with diet coke!