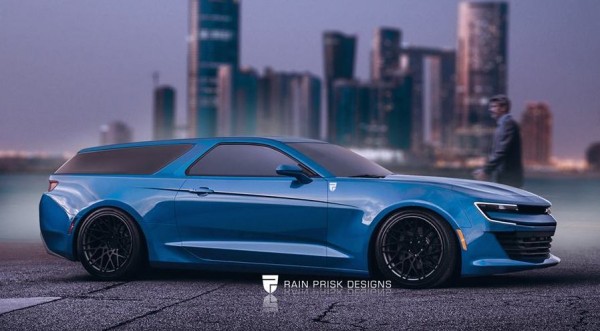 A strong and creative imagination is the best tool a car designer can possess. In the case of Estonian designer Rain Prisk, that imagination is backed by an immense reservoir of artistic talent, the result of which is fantastic design proposals such as this, a modern-day Chevy Nomad he’s rendered based on the latest generation of the Camaro.

Prisk has wowed us before with his other great ideas such as Ferrari FF Off-Road and Lexus LFA Shooting Brake. With his Chevy Nomad though, he steps up his rendering game by bringing back an iconic model from the ashes. Granted, he hasn’t been very faithful to the original design in his modern interpretation of the Nomad, but what he is proposing here is designed to work in the real world.

The shooting brake market is pretty hot at the moment and if Chevrolet decided they want to play in this segment, a new Chevy Nomad would be the perfect candidate. The rendering here gives you some ideas as to what a two-door wagon Chevrolet would look like, but we reckon it needs some chrome and probably round headlights if it wants to play the nostalgia card.

Being based on a Camaro is ideal for a modern-day Nomad, especially if it’s the V8 version. Hopefully, though, the new Nomad’s V8 is more powerful than the 180-hp unit the original had!