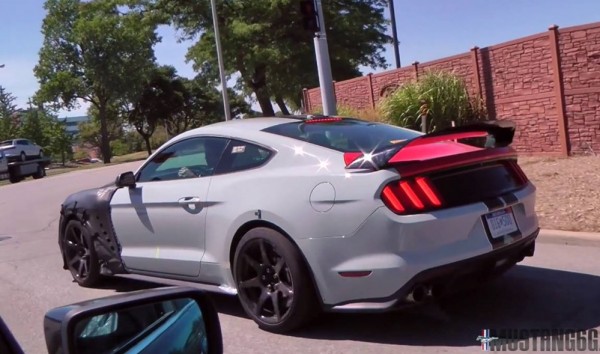 Now that the Regular version of the current Ford mustang is starting to go out of fashion and its GT350 Shelby variant has got its feet grounded in the market, it’s time for Ford to come up with the next best thing. That’d be a new Shelby GT500 and it seems to be almost ready, judging by the state of the prototype caught on film the other day near Dearborn Proving Ground.

While this brazenly filmed spy video does not reveal much about the 2018/19 Shelby GT500 in terms of aesthetics, because of the heavy camo, it does give us some ideas as to the kind of firepower the car might be boasting. I mean, when a motor sounds this nasty it sure has something to shout about:

As for the specs of the new Shelby GT500 all we can do for now is speculate based on what we know from the previous generation model. We know that with 650 horsepower that car was for a time the king of all muscle cars, a title that’ll soon be passed to the new Camaro ZL1. So it would be natural or the new GT500 to try and reclaim the throne, and for that it is going to need a helluva lot more power than before. Some sources are claiming an output of 800+ horsepower for this car which sounds preposterous, but who knows.