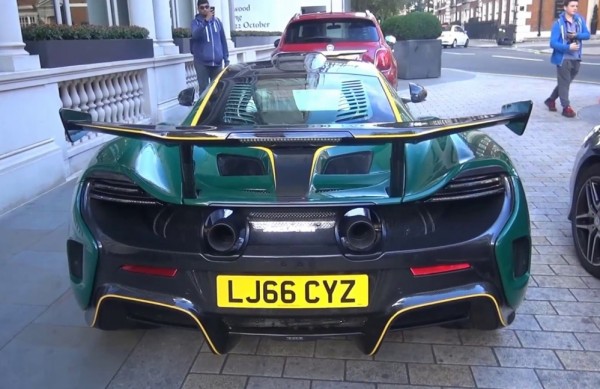 No, we didn’t lie to you when we said McLaren MSO HS is a bit of unicorn with just 25 copies being produced. It is just sheer chance that two of the most unique examples were spotted about the same time driving around the same parts of London. What a spectacle it is though, and what a car. Who knew McLaren could make a car sound that cool?

McLaren MSO HS is the first car from the British manufacturer that sounds properly exotic. Even the mighty P1 does not have a truly sonorous soundtrack. They must have modeled the High Sport’s exhaust system on one of their racing models because that is not what a street car should sound like!

Each one of the 25 McLaren MSO HS models is bespoke to the individual who ordered it and they get to choose every last detail of the paint job, stripes, accents, the finish on the carbon fiber, the color of the wheels, the color of the Alcantara inside the cabin plus the trim pieces and even the stitching. While that is a testimony to the capabilities of McLaren Special Operations,  sometime it results in less than savory creations like the green HS featured here. Not that it’s awful… but come on, who designed this? The owner’s six-year-old?