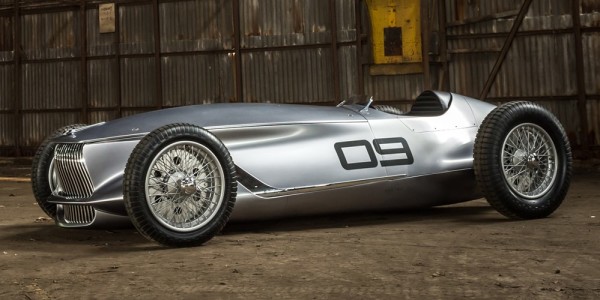 The retro concept we told you about before set for debut at the 2017 Pebble Beach Concourse became official over the weekend, and here it is in all its old-timey glory. Again, we don’t know how a company founded in 1989 can have heritage and history, but they describe Infiniti Prototype 9 as a concept that “represents a reimagining of a 1940s race car with time-honored production techniques employed to realize its retro design.”

Infiniti concepts of the past all had some kind of value in terms of production, whether it was the preview of a new design language or showcasing new technologies. And although at first glance Infiniti Prototype 9 appears to be just a flight of fancy with no practical value, it does have something worthwhile for the future of the company and that is an application of a prototype electric motor and battery from Nissan Motor Corporation’s Advanced Powertrain Department. So basically, this glorious thing has some kinship with the ghastly Nissan LEAF. This one, however, has panels hand-beaten by by a team of Takumi – Nissan Motor’s master craftspeople.

As for the inspirations behind the project, we best let the makers explain it because it’s just too complex to follow really:

Prototype 9 was inspired by an emerging era of Japanese motorsport. The custom-built Prince R380, which also will be shown during Monterey Car Week at The Quail, a Motorsports Gathering, broke several land speed records in 1965 before taking overall victory at the 1966 Japanese Grand Prix at Fuji Speedway. Prince Motor Company is considered to be Japan’s original builder of premium automobiles, and its legacy can be traced to INFINITI Motor Company and its current model line. The R380 shown at The Quail is the actual Japanese Grand Prix-winning car, believed to be the only surviving R380.