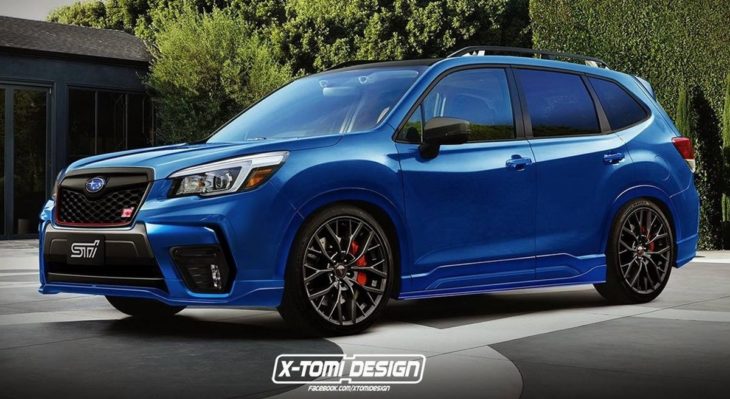 Subaru is a car maker that, though pretty conservative in terms of design, loves to experiment with different variants. That is why we are confident someone up in their offices in Japan is currently mulling over the possibility of a Subaru Forester STI model based on the recently revealed new version of the SUV.

There is that, and the fact that they did release something like that with the previous version of the Forester. That car came as a limited edition with tS designation, so it wasn’t a full STI. But then again, that car wasn’t as good as the new 2019 Forester. The new model definitely warrants an STI model. In any case, should they decide to go ahead with it, the 2020 Subaru Forester STI would look something like the picture above.

Granted, designer X-Tomi has got a bit carried away with “sportifying” the Forester here, lowering the SUV on a set of large wheels and fitting it with a full set of aero parts. But you have to admit the thing does look quite good. The rendering is based on the Sport trim version of the Forester which is already half way there in terms of becoming a dedicated performance version. It just needs a push by STI engineers to turn into a fully-fledged hotrod family bus.

If this imaginary Subaru Forester STI becomes reality some day, we would like to see a WRX engine in it with at least 300 horsepower. It would be a shame if they built it and then gave it an asthmatic 1.6 or something.