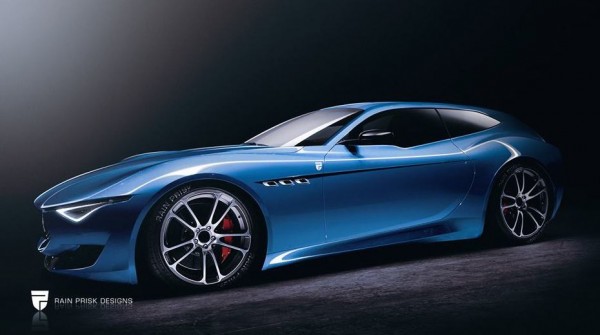 While the world is waiting for the production version of the Maserati Alfieri to be released, every now and again car artists flex their designing muscles by manipulating the images of the car and turning it into something even more beautiful. This shooting brake Alfieri is the result of one such exercise.

Designed by Rain Prisk Designs, the Maserati Alfieri Shooting Brake does not mess around with the amazing looks of the car at the front and on the sides, and contents itself with adding a suave rear hatch to it in place of the conventional trunk, thus transforming the elegant coupe into a sexy and fashionable semi-wagon, or shooting brake.

Revealed as a concept at the 2014 Geneva Motor Show, Maserati Alfieri generated such a huge interest among friends and foes alike that the Italian had little choice but to green light its production. So Fiat-Chrysler confirmed in their long-term plan that they will indeed be releasing not just a coupe, but also a convertible version of the good-looking Alfi. There is also a room for a shooting brake in there, if you ask us.

The concept Alfieri was powered by a 460bhp 4.7 litre, naturally aspirated, V8 from the GranTurismo. The production version will most likely get one of the newer turbocharged V6 units out of the Ghibli.