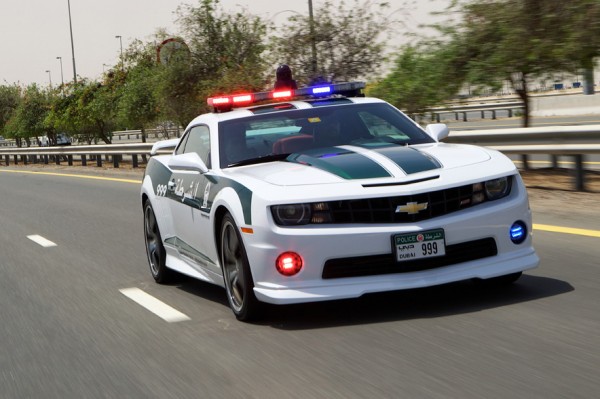 Even though it is hard to get excited about the Chevy Camaro joining the fleet of exotic cars that Dubai Police has put together – what with the Lamborghini Aventador, Ferrari FF, Mercedes SLS, Bentley Continental, and the Aston Martin One-77 – it is still a big deal for Chevrolet. Dubai Police has picked the SS version of the Camaro.

Powered by a 6.2L V8 engine, the Camaro SS has 426 horsepower and a maximum torque of 567 Nm, which translate into a top speed of 250 km/h and acceleration of 0-100 km/h in 4.7 seconds. It is still a two-door though, which makes it a bit impractical for Police work.

If Dubai Police wanted something cool, fast and expensive, they could order like 50 BMW M5 F10s for the same money they blew up on their fleet of exoticas.

The Chevrolet Camaro has been a huge success in the Middle East sports car market. It was named Best Muscle Car in four consecutive years from 2009 to 2012 by leading automotive publications. The Camaro ZL1 was awarded “Muscle Car of the Year 2012” by Evo Middle East magazine in February this year.